Today we made our main annual cut of the Chapel Green hay meadow in Rocklands. For the past several years, this small (c. 0·01 ha) recovered grassland has been managed as a wildflower meadow. Since I was a boy, such meadows have all but disappeared from the United Kingdom, many of them being ploughed up, converted to pasture or built on; in all, 97% of our meadows have been lost since World War II and it is now our most endangered type of vegetation. As in many other matters, Rocklands has bucked the trend and our modest patch of flower-rich grassland has been improving in quality even in the short five years that we have lived here. Chapel Green is an asset of which the village can be justifiably proud.

Traditional meadows grow on soils which have been impoverished by many years of grazing, which constantly removes nutrients from the soil. A regime of late-summer cutting, just after the flowers have set seed, and subsequent removal of the hay keeps nutrients low and enables the more interesting and less widespread plants to flourish. From the nodding heads of Cowslips Primula veris that herald the spring, through the June carpet of yellow Bird's-foot Trefoil Lotus corniculatus and Yellow Rattle Rhinanthus minor to late summer Meadowsweet Filipendula ulmaria, there is always something in bloom. The purple spikes of Knapweed Centaurea nigra and yellow discs of Fleabane Pulicaria dysenterica attract butterflies which add to the palette: we have over a dozen species, and resident colonies of Essex Skipper Thymelicus lineola, Common Blue Polyommatus icarus and gaudy Six-spot Burnet Zygaena filipendulae moths. A careful observer might find the curious Bee Orchid Ophrys apifera – no longer a common plant and seven of which flowered in 2014 – or Common Spotted-orchid Dactylorhiza fuchsii, the first spike of which 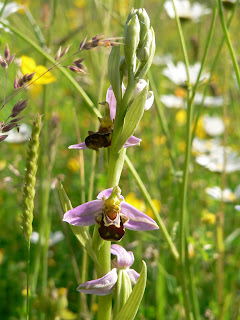 appeared this summer. In all, the green is home to fifty species of flowering plants. Insects and seeds attract the birds, and Swallows and Swifts skim over the grass, Goldfinches worry the seedheads and owls hope for a vole – Barn, Tawny and Little Owls all visit. The population of Field Voles reaches such levels that on the 2013 cut the fleeing mammals were almost biblical in proportions. Chapel Green's pond is home to Great Crested Newts Triturus cristatus, Grass Snakes Natrix natrix and several types of dragonfly. Kingfishers check in from time to time; our first, bitterly cold winter a Snipe huddled in our drainage ditch, while last year a Sedge Warbler established its territory in the tall Great Willowherb Epilobium hirsutum and Reedmace Typha latifolia at the water margin.

After the cut, we will wait for the aftermath to emerge, close-cut perhaps two or three times more and then let the meadow settle down for the winter. All we need to maintain this rich and diverse meadow is to continue the regime of late-summer cuts, remove the resulting hay, and ensure that cars do not park on the area in winter; nature will do the rest. Let's enjoy this wonderful asset to our village.