Neotropical Birding 17 is out!

Neotropical Birding 17 is printed and has been available at the UK Birdfair since Friday. I was there today and enjoyed seeing the Neotropical Bird Club stand. This issue has been assembled in record time – six weeks – but is nevertheless one of the most satisfying numbers I have put together. Photos of what will now be recognised as a "new" species of owl for North America (Strix sartorii), the article on Sierra de Perijá and the nice image of Pterodroma–Stercorarius interspecific social dominance mimicry (ISDM) are my highlights. I had some really nice unsolicited comments from people at the Birdfair - thank you all!

Welcome to issue 17 of Neotropical Birding! 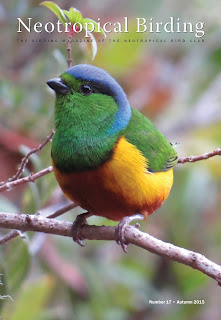 You've heard of Africa's Big Five and Big Seven, but the average birder prefers the Big Six. Where in the world? Of course, it's the Paraguayan Chaco. Our veteran ornithologists Paul Smith and Rob Clay take us on a tour that targets the Chaco Big Six – figuratively, although they will literally be taking a group there on one of our regular NBC Fundraising tours later this year. They might even throw in a couple of extras that could one day make a Paraguayan Big Eight!

For a break from the heat, try some Andean birding in the isolated mountain range of Perijá on the Colombia-Venezuela border. This little-visited and relatively neglected range has been explored with some difficulty from the Venezuelan side, resulting in some remarkable discoveries in recent years. Travelling to the Colombian side, Trevor Ellery takes us to ProAves' newly-established Chamicero del Perijá (Perija Thistletail) Reserve. The lodge gives access to birds that were the stuff of dreams about only three or four years ago, including what will almost certainly be recognised as an endemic “Rufous” Antpitta, Grallaria (rufula) saltuensis, as well as the eponymous thistletail.

The second of our Birding Sites is the Río Bigal Biological Reserve in eastern Ecuador, a favourite of Juan Freile, Vincent Mouret and Mathieu Siol. Nestled in the Andean foothills, the reserve enjoys the best of both worlds, with a heady avifaunal mix of Amazonian and Andean species – and some really special birds characteristic of these elevations like the poorly-known, but stunning Pink-throated Brilliant Heliodoxa gularis.

Sticking with seabirds, Alex Lees, Fabio Olmos and Alberto Campos go pelagic birding off the coast of NE Brazil. Their targets? Trindade Petrel Pterodroma arminjoniana tops a list that could include just about anything. Their article includes quite a few species for which there are only a handful of Brazilian records.

But if a handful of records is not exclusive enough, and you have a penchant for those really elusive birds, then they do not come much more enigmatic than Mexico's mystery Cinereous Owl Strix (“varia”) sartorii. Birding at the Cutting Edge, Nathan Pieplow and Andrew Spencer present the first photographs and sonograms, and tell us all about one of the most exciting encounters in North American birding for some time.

Our Globally Threatened Bird, the Colombian endemic Chestnut-capped Piha Lipaugus weberi, was only discovered in 1999 and is already Endangered – perhaps even Critically Endangered. This reinforces an idea that crops up with alarming regularity in Neotropical Birding: species becoming extinct even before we know them.

Alex Lees' invites you to “Get your lists out!” one last time for his final thoughts on Splits, lumps and shuffles. This is the column that turns everyone into an armchair taxonomist, providing fuel for arguments over the sanity of the AOU or IOC, Clements or HBW / BirdLife. Birdwise, it's the usual suspects once again: Pyrrhura parakeets, woodcreepers and Splitalopus. But should you have been paying more attention to those Grey-necked Wood Rails and Red-crowned Ant Tanagers – a probable future armchair tick or two for anyone who has been to both Central and South America?

As ever, Jez Bird brings us his regular NBC Conservation Awards Update. NBC continues to finance vital projects to conserve Neotropical Birds. Please join the Club if you would like to support our valuable work.

And finally, I would like to thank all our contributors, many of whom supplied unique material to meet a very tight schedule, writing articles, answering requests and sending photographs directly from the field. Thank you for sparing the time to make NB17 possible. I owe a special debt of gratitude to those who provide first class text and images for every issue, helping us unconditionally – you know who you are, and our readers do too! 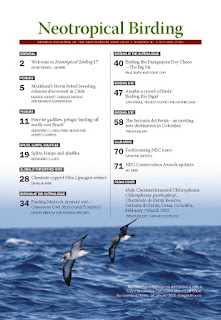