After another relatively warm, sunny day, the night was mild, despite a cloudless sky: 7.0°C by 06h10 (BST) when I turned off the trap. There was no detectable wind and a waning crescent moon. No new species, but Chestnut is the first of the year.

After a fairly warm, sunny day, the temperature fell rapidly once the sun had set, reaching 2.3°C at 21h45, but warming to 3.9°C by 05h15 when I turned off the trap. There was no detectable wind and a waning crescent moon. I turned the trap on at dusk (18h45) and an hour later activity peaked with half a dozen noctuids buzzing around the light and singles of March Moth, Shoulder Stripe, Early Thorn and Oak Beauty had landed on nearby walls.

By morning, new for the trap were Early Thorn, Red Chestnut and Powdered Quaker. Pale Pinion was new for the year, although not for the trap (the first was caught last October). This species is spreading in East Anglia. A hundred years ago, South (1908) notes that "it seems to be absent from the eastern counties, except Cambridge – where, however, it is scarce". Several decades later, both Skinner (1984) and Waring, Townsend & Lewington (2003) state that it is occasionally recorded from East Anglia; Norfolk recotrds date from 2002.

After a warm, sunny day, the sky clouded over towards dusk, so the night was fairly mild: the forecast minimum temperature was 7°C, so 5°C is probably more realistic for the village. The full moon must have been quite well covered, but a moderate westerly breeze kept up all night. As usual, by 19h00, moths were buzzing around the trap, with Oak Beauty and Pine Beauty perched on the outside of the perspex. A smart Red-green Carpet rested on the nearby house wall. By morning a spruce Shoulder Stripe was on the outside of the trap. Within were good numbers of Orthosia species, with last week's Clouded Drabs being replaced by a lone Lead-coloured Drab: an apt name for a moth that is overwhelmingly plumbeous in hue. All of these species were new for the trap.

This year my botfly larvae were not so simple to remove, particularly the one in my ankle, which caused enough swelling that my right foot no longer fit into a shoe. By Friday afternoon, after a failed attempt to expel it, I could no longer feel this larva moving about, and my ankle was becoming more swollen and discoloured. Fortunately, a kind doctor solved the problem by taking me to Norwich A&E today and surgically removing all the larvae. I was surprised to find that they were about half the size of those that I had successfully expelled in previous years, because they caused considerably more discomfort and inconvenience.

It's been a couple of weeks since I hopped onto the Cessna Caravan at Chan Chich, and there's no doubt that once again I have brought back with me as souvenirs of Belize more than the usual couple of bottles of Marie Sharp's Fiery Hot Habanero Pepper Sauce.

I've picked up Human Bot Flies elsewhere, but Belize is a particularly good place to encounter Dermatobia hominis. Fortunately, I have always had them on my legs where they cause only minor discomfort and are relatively easily extracted: I have heard tales of scalp infestation and can well imagine that this would be a serious inconvenience. Indeed, in rare cases, larvae living in the scalp have burrowed through the soft fontanel and lodged in the brain, killing the host. 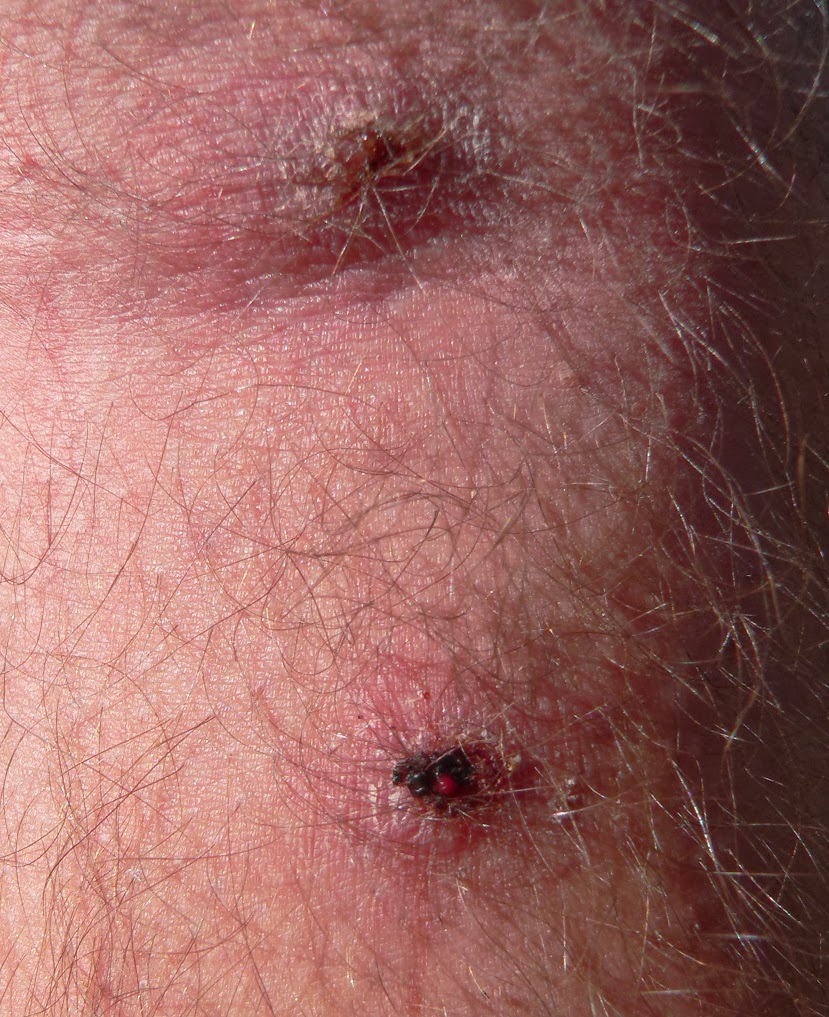 Bot flies are native to tropical America where they parasitise mammals such as deer, tapir, pigs, dogs and cattle, as well as Homo sapiens. I am not sure why they should be so common in Belize, since there are far more tapirs and cows in the Venezuelan llanos or the Brazilian Pantanal and I have never picked them up there. The larvae inhabit the subcutaneous layer of their hosts, where they form a pustule within which they feed on tissue fluids. Stiff, black, backward-pointing bristles anchor them in place as they scrape away with a pair of fang-like mandibles at the host tissue, while a breathing tube allows them to take up oxygen through a hole in the skin which opens after a couple of weeks. The larva is well adapted to its task. But the most extraordinary aspect of the bot fly's life cycle is its devious strategy for getting the larva into place. The adults capture a blood-sucking insect, such as a mosquito or deerfly, and deposit their mature eggs on the ventral side – a behaviour known as phoresy. Upon the vector's contact with the mammalian skin, body warmth triggers the eggs to hatch and the newborn larva gains access to the host through the bite wound or a nearby hair follicle. The larvae spend about two months within their host, during which time they pass through several instars before crawling out to pupate in the soil. The University of Florida provides a good introduction to the Human Bot Fly. 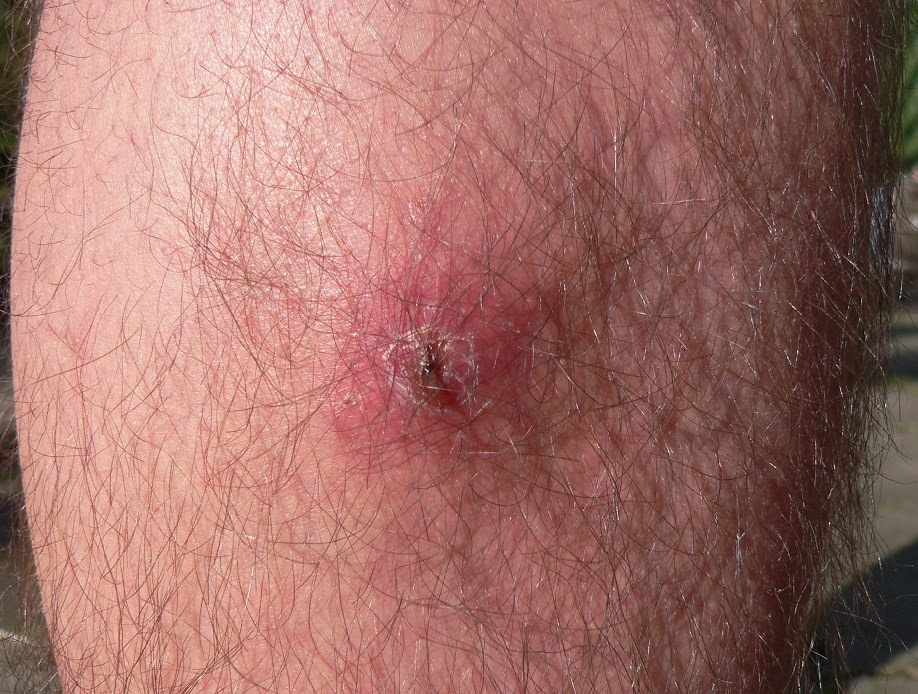 What happens if you (or your family members) do not intend to allow the larval bot fly to complete its natural span within your body? Going to a medic in the USA or Europe will almost certainly result in minor surgery – and perhaps counselling for the physician. As the US CDC stipulates, "Fly larvae need to be surgically removed by a medical professional". In fact, there's a much simpler solution: I prefer to sit it out until the larvae become uncomfortable and large enough to physically expel. From about the third instar onwards, mine have tended to move around and rasp away in the early hours, causing pain and lost sleep, so this is the time to get on with the task. The first time I had them, I tried taping bacon over the holes, then ham, then beef, but simply woke up night after night with a curious sort of "breakfast in bed". Much better is to apply a thick layer of petroleum jelly to the hole and wait a few hours. Starved of air, the larva will work their way out of their breathing hole and – if you are quick – you can deftly apply pressure to the surrounding skin and force the intruder out. Since by this time they are flask shaped, with the bulk of the body in the depths of the pustule, they typically pop out with some force – not unlike a miniature champagne cork!

After a warm day, and despite cloudless skies, the night was slightly milder than the preceeding few: down to 4.5°C at 06h00. The light to moderate southerly breeze kept up all night and there was a half moon. It seemed the ideal night to put out the first trap of the year. By 19h00, Orthosia moths were buzzing around the trap. All the moths captured by morning were spring species and therefore new for the trap. All of them, except for the March Moth, are attracted to feed on Sallow blossoms, plenty of which are available on the rather large tree at the bottom of the garden.