What do the scientific names of birds mean? 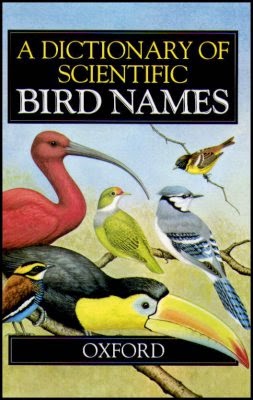 I have always found it easy to remember the scientific names of the birds and other organisms with which I work. In fact, for groups like fungi, insects and Neotropical birds, I find it easier to memorise a scientific name than to try to recall the often inappropriate English name that the species in question happens to be called in one place or another throughout its range. I think this preference for scientific names comes down to at least a rudimentary understanding of their meaning. Admittedly, I am the kind of person who likes to read a field guide or a dictionary, as many people read a novel. The Compact Oxford English dictionary is one of my favourite reads, albeit with the aid of a magnifying glass these days. So, naturally, I love James Jobling's A dictionary of scientific bird names. My particular copy was a gift from two fanatical world birders, Mark Sokol and Lanie Langlois, the sort of people who spend their Californian winter weekends and evenings researching the minutiae of avian systematics and taxonomy in order to better understand which taxa – potential species – they need to see on their next trip. At the time Jobling was extraordinarily difficult to find and was rather pricey, so I am eternally grateful to have received the book. A decade later, I suspect that I have had their money's worth: this is a book that I consult constantly and read for pleasure as well.

While I have been using HBW Alive over the last few months, I have noticed that as my mouse passes over a bird name, a box pops up with a surprising amount of etymological information. I have come to spend some time exploring this. I've always had a soft spot for Xiphocolaptes promeropirhynchus ("Sugarbird-billed Swordpecker"), the rhythm of the scientific name being almost poetic, its heft matching that of the bird – which is perhaps better known as Strong-billed Woodcreeper.

Only now have I found out that the person responsible is the very same James Jobling. Apart from adding this information to the species accounts, he has produced a Key to Scientific Names in Ornithology, which enables the user to determine the meaning of any scientific name, together with a fascinating introduction to the subject. So, if you have ever wondered what a bird's name means, look no further than this wonderful on-line resource. More information is to be found here.

Email ThisBlogThis!Share to TwitterShare to FacebookShare to Pinterest
Labels: birds