After an apparent absence of several years⁠—though these things can be notoriously elusive!⁠—Bee Ophrys apifera and Common Spotted-orchid Dactylorhiza fuchsii are coming into flower on Chapel Green. In previous years the best area for these orchids has been the southern edge of the meadow adjoining the road, the spot that is driest and has lowest fertility thanks to years of removal of hay. This year, the orchids are close to the pond margin in a much wetter, more fertile area (see photo) that we have been managing precisely to increase floral diversity. This morning there was one flowering spike of Bee and two of Common Spotted-orchid.

Ghost Moths Hepialus humuli are one of the few British moths that have entered popular culture and are—or used to be—generally known to the non-specialist.  In earlier times, when insects were more abundant, meadows more commonplace, street lighting less widespread, and people abroad in the gloaming, an encounter with this species would have been a frequent early summer occurrence. Frequent but nevertheless remarkable. The memorable sight of a dozen or more large white moths hovering over the grass tops as if tethered to a thread in the fading light doubtless gave rise to their name.

Today this sight is considerably less familiar. In fact, unless they make a special effort, even moth-ers have rarely seen it. So when keen moth-man and wildlife writer James Lowen asked if anyone in East Anglia knew of a lek to cover in his forthcoming book, I racked my brains and suggested the two places that I had seen male moths in recent years: Old Buckenham village green and Chapel Green, Rocklands. This latter is a tiny plot of wildlife meadow that was restored by Rocklands Parish Council two decades ago through a Millenium Meadows grant, and financial support from Norfolk Rural Community Council, Norfolk County Council and guidance from Norfolk Wildlife Trust. It is a tiny (c. 0·015 ha) fragment of managed habitat that holds a surprisingly diverse and interesting flora and fauna, amongst which is a lek of Ghost Moths. I say lek, but when I checked back through my records I saw that I had only seen single males in June 2014, and (twice) in July 2016.

On D-Day, Thursday 6 June, despite a cool and windy evening, at 9.45 p.m.. I decided that I could no longer put off checking whether this year would produce an improvement on the singles that my memory had embellished into a weaving and bobbing troupe. I was fully prepared to tell James that the promised lek had not materialised and may have been unreliable in any case. What a relief to find two, then four, then finally a dozen male Ghost Moths "pendeculating" – Kettlewell's neologism for South's "swaying themselves to and fro without making progress". 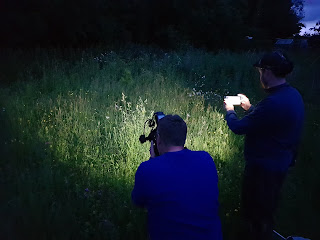 The following evening, James was able to visit Chapel Green, arriving at 9.20 p.m. on his way back from another mothing assignment at Dungeness with moth expert Will Soar. For the first 20 minutes we enjoyed the meadow's wildflower display, twitching at passing Straw Dots Rivula sericealis and Common Swifts Korscheltellus lupulina (the latter a close relative of Ghost Moth) identified by Will. It was not until 9.40 p.m. that the first of our glowing white targets appeared, immediately followed by another, and another... Soon a group of six males were swaying and weaving on one side of the meadow, with another couple on the other. Our neighbour Carolyn, who coordinates the Chapel Green Management Committee, came out to enjoy the spectacle. We wondered if we might be lucky enough to see females, and shortly afterwards a dull yellowish brown female did indeed appear, immediately to mate with her chosen male. We found two pairs of mating moths, both on tall grass spikes, as well as a bloated female that was surely about to deposit her eggs. By 10.00 p.m. the display was over, and only these five Ghost Moths remained, clinging to their respective stems. The entire show had lasted exactly 20 minutes.

What is going on? A lek is an aggregation of male animals that come together, usually at a traditional site, to display together in order to compete for access to females. The phenomenon is especially well-documented in birds (particularly grouse and manakins) but not so widely-known in insects. In the case of Ghost Moths, the males hover over the grass, fanning their wings in order to release from scent brushes on the tarsus of the rear pair of legs a pheromone that attracts the females. The latter enter the lek briefly, select a mate, copulate on a grass stem and then fly off to drop their eggs over suitable grassy areas. The process was diligently observed and described by Mallet in his 1984 paper.

Formerly common, Ghost Moth is now a UK Biodiversity Action Plan species, listed because its populations are declining markedly. Conservation of this and a suite of other disappearing grassland plants and animals species is precisely the reason that Rocklands Parish Council manage this small area as a wildflower meadow.