About The Curious Naturalist

Nature has been my calling for as long as I can remember. It's not an interest or a hobby – it's a way of life. Early on I had a passion to be not an astronaut or fireman, but a conservationist – and I have an essay I scrawled at primary school to prove it. I have gone on to work in international conservation – sometimes at the heart, but mostly on the fringes – for the past quarter century. I have worked at the most basic, grass-roots level and also managed major conservation programmes and worked as a consultant for the principal inter-governmental organisations. Be careful what you wish for! 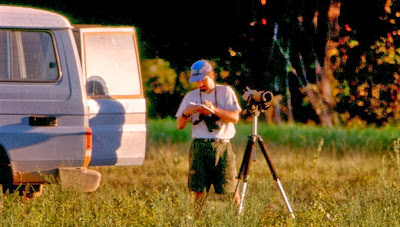 I have spent 30+ years living and working throughout Latin America, and occasionally as far north as Alaska and as far south as Antarctica, but for the moment I'm based in rural Norfolk. There could not be a bigger contrast between the lush, primary forests of the Amazonian foothills, with their mind-boggling biological diversity, and the totally anthropogenic agricultural landscapes of south Norfolk, where we humans have done our best with machinery, chemical agents and lead shot to eradicate any trace of the natural environment. But nature is irrepressible, and wherever you are, there is always some fascinating natural phenomenon to observe and admire. The Curious Naturalist is just a series of jottings from my field notebook. Some of my more formal publications are on ResearchGate or Academia.edu.

In my professional life, I work as a consultant on various aspects of the conservation of Neotropical birds. This year I researched the status of threatened Neotropical birds for BirdLife International as part of the IUCN Red List update. Fieldwork included facilitating a workshop for the Western Hemisphere Shorebird Reserve Network to identify priority sites for shorebird conservation in Venezuela. Follow-on funding allowed us to run a regional training workshop and bird censuses in two regions of W Venezuela, which led to a proposal to designate Venezuela's first WHSRN site.

At home, I am an editor of the Handbook of the Birds of the World (HBW Alive) and the Lynx and BirdLife International Field Guides series, Associate Editor of the Red Data Book of Venezuelan Fauna, and Research Associate of the Phelps Ornithological Collection and the NGO Provita. In 1993, I was part of the launch committee of Neotropical Bird Club and now serve on NBC Council as co-administrator of our Conservation Awards Programme. As a founder member of the Venezuelan Ornithologists' Union (UVO), I sit on UVO's Venezuelan Bird Records Committee (CRAV-UVO) and am an eBird Reviewer for Venezuela.

I have led over a hundred bird tours in Latin America and the USA (these days mainly for Rockjumper), and have recently embarked on a programme of free local nature walks and wildlife events in Norfolk aimed at raising awareness of our natural environment.

I hope you find something to enjoy.