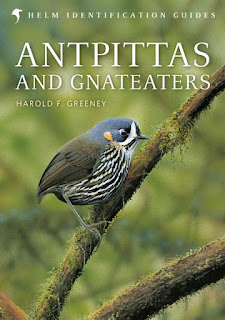 Just finished my review of Harold Greeney's magnum opus, to be published in Neotropical Birding 24...

Thanks to Bloomsbury Publishing for providing a review copy.

This book is quite obviously a labour of love and, for anyone familiar with the author’s huge body of published work, it could never be anything but thorough. Harold Greeney is unashamedly a natural historian, a term that has regrettably become unfashionable in our modern world. This book does indeed read in places like a work of the Victorian era, with all the positive connotations that this implies, and venerable 19th and early 20th century names like Sclater, Godman, Salvin, Hartert and Hellmayr crop up repeatedly. The feel is maintained by the extensive excerpts from original descriptions that preface some of the species accounts, setting a tone of wonder and discovery that befits a group about which so much remains to be unearthed.
Distributional information forms a major part of this work. Maps are a model of clarity, with base cartography showing national borders and major rivers upon which known ranges are carefully mapped. A very useful innovation is the inclusion of marked type localities. As Greeney is at pains to point out in the introduction, researching distribution “was one of the most time-consuming aspects of this work”. The maps are based on a vast compilation of records, comprising specimen data, publications, and voucher records held at archives such as xeno-canto (https://www.xeno-canto.org/) and the Internet Bird Collection (https://www.hbw.com/ibc). The half-a-billion records in the increasingly popular (and powerful) eBird system (https://ebird.org) have also been evaluated, with sight records employed cautiously, emphasising to eBird users the utility of supporting unusual records with voucher audio or visual material. In painstaking detail, sight records have routinely been verified by correspondence with the observers. The source of all records is provided; as the author admits, he did not want to condemn future revisers to repeat the process by obscuring the primary data beneath interpretative accounts. These data will be passed over by many readers, but for perhaps as many others they will be a gold mine to be exploited again and again. They are the sort of feature that sets this monograph apart from so many other similar titles covering other bird families, and their inclusion can only be applauded.
We have established that the library and museum research has been extraordinarily thorough. But Greeney’s credentials as a field ornithologist are second to none. Texts are thoroughly underpinned by hard scientific data, but Greeney contributes much original observation of his own. For example, referring to Plain-backed Antpitta Grallaria haplonota, he relates “A pair that I observed in the foothills of Ecuador (chaplinae) appeared to increase song rates in response to darkening skies...”, a trait that will be familiar to anyone who has spent time with the species, for example, in Rancho Grande Biological Station, Venezuela, where its haunting song is a feature of the soundscape during misty hours. Indeed, much life-history information, such as nesting data, seasonality, plumage and moult, is here published for the first time. Some of this is recounted in a way that captures the naturalist’s joy at observing the events, such as Greeney’s personal account of a Tawny Antpitta Grallaria quitensis adult relieving its incubating mate on a snow-bound nest.
Taxonomy follows the American Ornithological Society, with one minor departure in the recognition of Grallaria fenwickorum rather than G. urraoensis for Urrao Antpitta, in adherence to International Commission on Zoological Nomenclature regulations. The author recognises that some of the ‘species’ treated are therefore obvious species complexes, the component subspecies of which will in all likelihood, once the evidence is formally marshalled, be elevated to species level. Obvious examples are the Rufous Grallaria rufula and Tawny Antpitta G. quitensis complexes, which potentially comprise seven and three species respectively; the Sierra de Perijá taxon saltuensis of northeast Colombia and northwest Venezuela is perhaps the clearest case in point, originally assigned to G. rufula when described more than 70 years ago, with the remark that it “it seems possible that it may be a distinct species”. All seven current subspecies of Rufous Antpitta are illustrated and, since all 156 taxa recognised in the book are treated separately and in detail, disentangling the taxa in future will not prove too much of a challenge.
With the sheer volume of information included here, it is no surprise that the odd minor error has crept in. The text states (p. 436) that the range of Slate-crowned Grallaricula nana “does overlap with Sucre Antipitta [G. cumanensis] in the east [of Venezuela]”, from which the crucial word “not” is missing. More seriously, subspecies labels have been incorrectly placed on the map for Plain-backed Antpitta Grallaria haplonota, surely a slip-up at the layout stage. But such things should not trouble us.
Plates are of the high quality we have come to expect from David Beadle, and are a pleasure to peruse. In this case one definitely can judge the book by its (stunning Crescent-faced Antpitta Grallaricula lineifrons) cover. Photographs of live birds are provided for all currently recognised species, except for Elusive Grallaria eludens and Grey-naped Antpittas G. griseonucha, where specimens are substituted. Not surprisingly, given the author’s track record of publishing nest descriptions, many of the photos are of nests, nestlings or fledglings – all of which will be excitingly unfamiliar to many readers.
This is one of the best-researched avian monographs ever published, and leaves little to desire in the coverage of its subject. In fact, it would scarcely be an exaggeration to say that everything we currently know about this group is contained within this book, so the only factor in deciding whether or not to acquire it is whether antpittas and gnateaters are of interest to the potential purchaser. Given the almost cult interest in these enigmatic cryptic birds, which to judge by the growing number of feeding stations is on the increase, I am confident that the book will sell itself.

Christopher J. Sharpe
Posted by Kaikuse at 15:00 No comments: 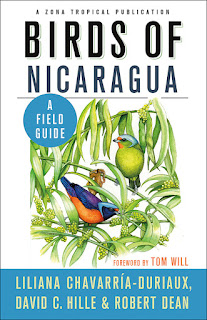 Birds of Vietnam goes to press

Birds of Vietnam, the second title in the Lynx and BirdLife International Field Guides series has gone to press. More details can be found on the book's Lynx webpage. Sample page spreads are available for download too. This pioneering publication is the first ever field guide to the avifauna. The new flexicover version is available at a discount and with free worldwide shipping until 20 December. More information to follow soon... 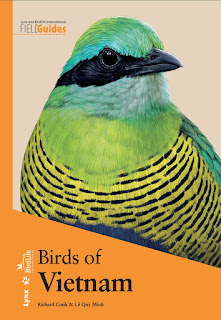 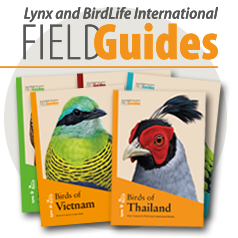 Lynx Edicions is launching the Lynx and BirdLife International Field Guides series at Birdfair. If you're going to be there, come along to our stand for a chat with two of the ornithologists in charge of this collection: Guy Kirwan on Saturday and me on Sunday. More information here. 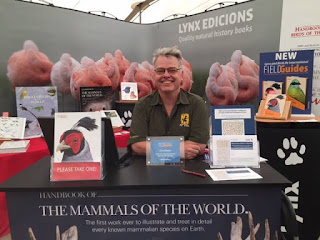 Birds of Thailand is out! 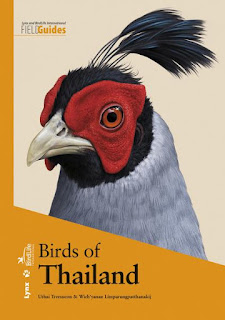 Birds of Thailand, the first title in the Lynx and BirdLife International Field Guides series has gone to press. More details can be found on the book's Lynx webpage. More information to follow soon...