I have just received a review copy of the new Crossley ID guide from the kind folks at Princeton University Press. I am a big fan of photographic guides – especially Kenn Kaufman's North American series and WILDGuides pioneering UK-centred field guides. I have also greatly enjoyed Crossley's excellent eastern North America guide and love the new Warbler Guide. I've almost worn the cover off my copy of Steve Howell's astonishing Hummingbirds of North America. So I was excited to see the first photo guide to the birds of the country I grew up birding in. With some reluctance, not to say embarrassment, I have to admit to being disappointed. The Britain & Ireland book is not as well crafted as the previous Crossley guides and appears to have been rather hastily finished. As a life-long birder, I find it unconvincing. I wonder what the stated target public – beginner and intermediate birders – will make of it?

A book like this is the product of decades of field experience and years of hard work, and the end result is never perfect, so I hesitate to be critical in order to avoid doing the authors and publisher a disservice. Let's celebrate the positive aspects first.

1. The guide is limited to the UK avifauna, so beginners in Britain will not be confused with a host of extralimital European vagrants. The number of species is about half of those that make up the British list - leaving out the scarcest birds that beginners are unlikely to encounter or to successfully identify.

2. The use of digitally-manipulated images in a UK bird guide is certainly a novel approach, though one that was pioneered years ago and has been perfected by other exponents of the art.

3. The order of species in the book puts similar-looking species together, rather than trying to follow an ever-changing, artificial 'systematic order'. The utility of the ordering of field guides is something that Crossley and others have championed elsewhere.

4. Birds are shown in their typical habitat. Often this will clinch ID, and also helps reinforce the association between bird and habitat.

5. Population figures help separate commoner species from rarer lookalikes (e.g. there are now more than ten times the number of Marsh Tits in the UK as there are Willow Tits). The sources are the most recent available: the 2013 assessment of the Avian Population Estimates Panel for the UK and the New Atlas of Breeding Birds in Britain and Ireland (Irish estimates are now over 20 years old). These important primary data rarely appear in bird guides.

6. The accompanying maps are the perfect size and easy to interpret.

7. The photographs are generally good and the text is written by an expert. This book presents the combined experience of two leading birders and should, at the very least, serve as a teaching guide. With hundreds of photographs of birds collected in one book, there is plenty to enjoy here. This is a great book for armchair birding.

So what's not to like? Well, perhaps I have been spoilt by the likes of Kenn Kaufman, WILDGuides, Steve Howell, Stephenson & Whittle, and Crossley himself. Knowing the quality of Princeton publishing, I was expecting a definitive guide for beginners – as well as something that I might use as a field guide.

1. At 16 x 24 cm, this is not a field guide – although the authors make no claim that it is: Crossley states that his guides are “a halfway-house between traditional field guides and being in the field”. However, this halfway-house does leave wide open the niche for a proper, well-executed photographic field guide to the UK's commoner birds...

2. From my recollection (although I do not have a copy to hand), the size of the photographs is relatively much smaller than those used in the Crossley eastern North America guide, so there is somewhat less bird per plate. Sometimes this is critically important in identification.

3. Photographic quality varies from excellent to, frankly (in a minority of cases), inadequate. There must be plenty of images of what has a claim to be the world's most photographed avifauna, and I am surprised that the authors did not source them. Scarcer birds like Short-toed Lark are poorly served, while some common species, like Garden Warbler, do not enjoy even one decent photo. Good comparative images (showing similar species under comparable light conditions and in the same pose) are usually lacking. If photo guides are to compete with those that use painted plates, this must be addressed.

4. Photo editing. Some of the birds appear at odd angles, in an unnatural perspective, with disconcerting shadow effects, or truncated legs. One has to make allowances for technology, but other guides have coped with the design challenges much better to produce more seamless birdscapes. Looking at some of the critical species for field identification – say, Willow Warbler and Chiffchaff, or Willow and Marsh Tits – I wonder how much these plates will help the beginner. The main photograph of Willow Tit is of a bird that appears to have a glossy cap and a pale base to the upper mandible, features more characteristic of Marsh Tit; conversely the main photograph of Marsh Tit is of a bird showing a long bib, which tends to be an (unreliable) indicator of Willow Tit. In the case of the Willow Warbler, shadowing makes some of the birds appear to have (atypical) dark legs. Of course, these are all photographs of real birds under field conditions – and birds do not always conform to the field guides. Nevertheless, judicial manipulation of the photographs would have produced images more typical of each species, exhibiting the salient field characters mentioned in the text. 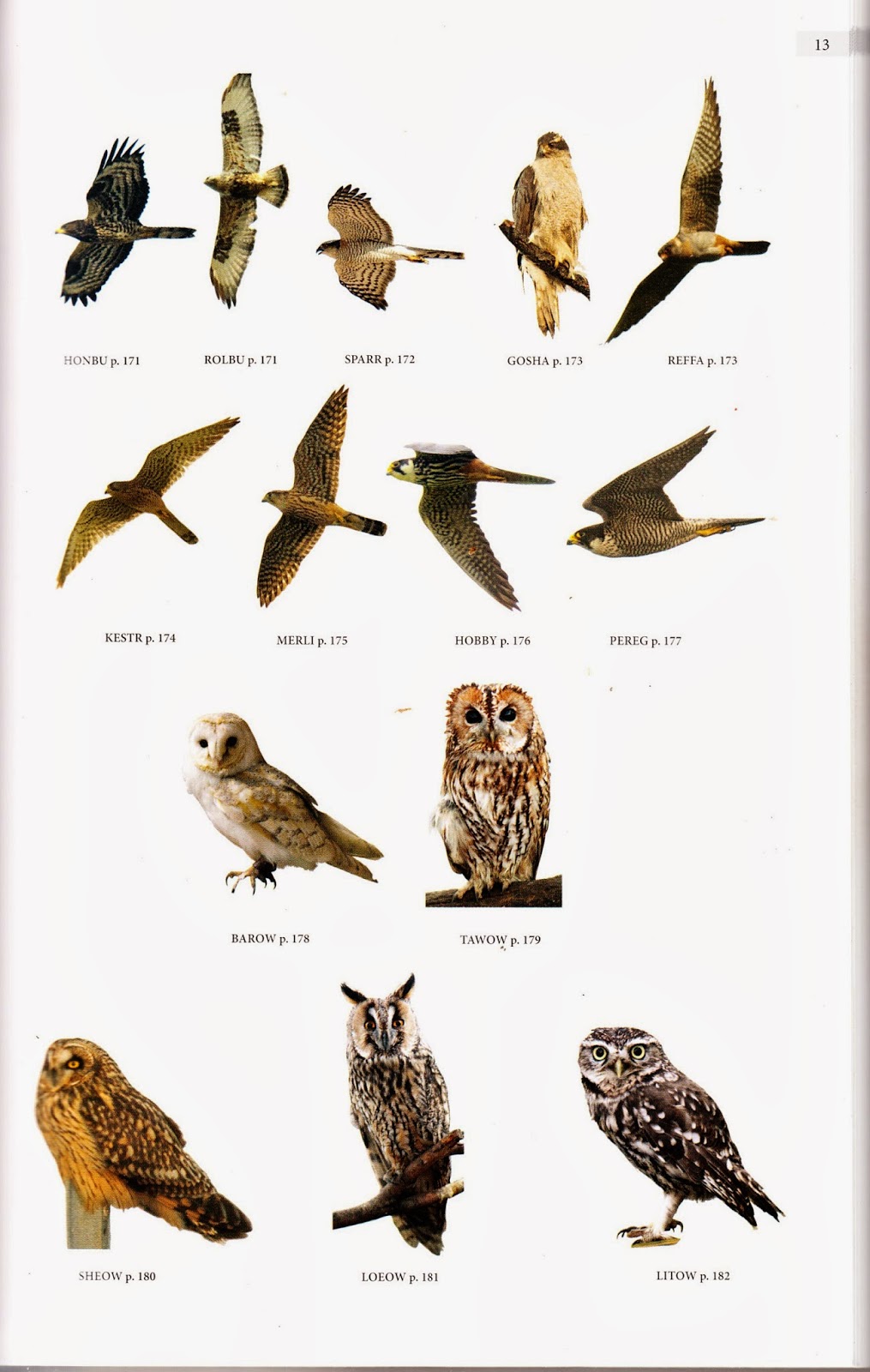 5. The authors set much store by size estimation – and so they should – yet I find gauging size to be one of the major drawbacks of the book. I naturally expected to have difficulty estimating size from the main plates (Redstart could be anything up to grouse size here), but the comparative plates in the introduction offer little help, even though they were apparently “carefully measured”. To point to just a few examples, the Mistle Thrush looks about the same size as the Nightingale, Coal Tit looks similar to Nuthatch, Starling and Yellowhammer look similarly sized, Woodpigeon appears a bit slighter than Rock Dove, House Martin and Swift have comparable wingspans, Little Owl looks just a tad larger than Barn Owl and Red-footed Falcon is huge! These plates really need to be corrected.

6. The text is very good, but it does not seem to mesh very well with the photographs, almost as if the two were separate, parallel efforts. Thus I suspect the beginner will struggle to find the field marks to separate Grey and Golden Plover, for example (although they are there in the plates and text), and will have little chance of identifying the much scarcer American Golden Plover. It would have been more useful to integrate the text into the plates, with annotated pointers. Far from revolutionary, this has been fairly standard in bird guides since the time of Peterson.

7. I find the use of BTO codes a minor annoyance and I suspect that beginners will too. I still cannot figure out which species is preyed upon so frequently by Great Black-backed Gulls ("AMCO" – familiar as the alpha code for American Coot in the North American BBL and AOU systems).

In sum, a photographic guide is a welcome addition to the British birder's library of field guides. However, I am not convinced that this guide really capitalises on the available image base and contemporary technology. With a number of species, the photographs are such that an artist could have done a better job. I also have my doubts as to whether it is a guide for beginners. Nonetheless, the authors have fulfilled their objective of producing a useful learning tool: this is a handy collection of photographs and texts that will undoubtedly help birders hone their skills away from the field. This is certainly a book that I will enjoy dipping into over the coming weeks – but I will probably still continue to buy one of the RSPB pocket guides when choosing presents for my non-birding friends, and I doubt that I will use this guide as a primary identification reference.

As I see it, there's still a need for a proper photographic guide to the UK's birds...