With a low pressure dominating the British Isles, Saturday looked to be a mild day with southerly winds and a few showers - perfect for a day at the coast with the boys. They had long been asking me to take them to a place to search for fossils; an Internet search had thrown up West Runton, a small town on the north Norfolk coast, on the west side of Cromer, but we never seemed to have the right tides for a visit. A full moon today brought the promise of a low spring-tide at mid-afternoon, which would give us a chance to scour the lower shore for fossils and unusual marine life.

Arriving at 11h30, the first thing we saw was a 2nd-winter Med Gull that flashed in front of the windscreen as we parked the car. It then gave us some good opportunities for photography - even with a basic point-and-shoot camera - as it teed up alongside. 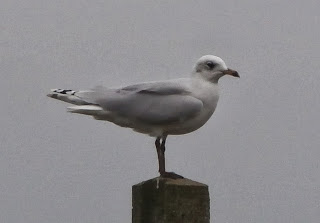 Getting out of the car, a large, pale Wheatear flushed from the dunes. Resisting the impulse to chase what was surely Isabelline, I hurried to catch up the buys as they scurried down the slipway to the beach. After a bit of rockpooling, we noticed a small group of gulls at the water's edge and as we approached them another Med Gull flew over - this time a beautiful adult. Once again, a very obliging bird, which swam just offshore as the boys splashed through the shallows and hurled stones. 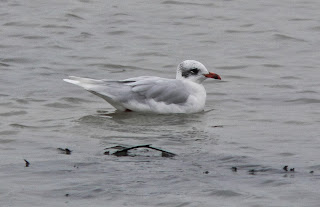 The day was warm and overcast with a good southerly breeze carrying just a touch of drizzle. Every so often a flock of Starlings would fly in off the sea, battling against the wind. The only other movement was two Brent Geese passing E (S) followed by three going W (N).

After exploring further pools and finding several fossils - a couple of belemnites and two large echinoids - it was time for lunch. As we drove to Wells, larger and larger flocks of Starlings pushed in off the sea. Some of them had dropped down at the roadside and dozens of them were foraging in the grass verge by the busy coast road. Over the half hour's drive to Wells, we must have seen a couple of thousand of these birds arriving.

After fish and chips at the harbour, we headed for an afternoon in the dunes at Wells Wood. A couple of hundred metres in, a group of birders were congregated under the pines at a spot where I've whiled away many a happy hour in the past. Their target - a Yellow-browed Warbler that had not shown for over an hour - was surely beyond the patience of the refuelled boys, so we headed for the beach; then some tree-climbing and cone-grenade throwing in the dunes.

After the boys had flushed or rolled on a half-dozen exhausted migrants, it was time to wander back to the car park. Passing the toilet block, a purely hypothetical question occurs: could a kids' toilet break possibly be long enough to snatch a glimpse of a Yellow-browed Warbler - just for old times sake? The order goes out to use the toilets, fill the canteens, then meet me "next to those people down the trail with cameras and telescopes - and take as much time as you need". The guy in the shiny golden tracksuit, with the medallion and cigar who hangs around the toilets is obviously harmless, so I feel I can make a quick dash for the pines again (I've screwed on those canteen tops pretty hard, but the clock is ticking). But there it is: an easy view of a lovely Yellow-browed quietly foraging just above eye-level in a nearby sycamore. I soak up as much as I can, while putting other visitors onto the bird, but as heads jerk round at the sound of scuttling feet, I decide I won't push my luck any further today...

As we drive back home I remember the first Yellow-browed I saw: at Spurn, in the early 1980s, on a school bird club trip. It was a lot harder to see. A quick sketch from my field notebook above.