The Chrsomelidae is a family of 35,000 species, often known as leaf beetles. It includes some brightly coloured, spotted or striped members, while the tropical species I am more familiar with can be conspicuously large and metallic green, blue or gold. The Cassidinae or tortoise beetles are easily recognised by their profile: this is clearly the group that inspired the Volkswagen Beetle. In South America, tortoise beetles are sometimes common and, being rather conspicuous, are frequently remarked upon by the visitor. They may show so much of a rim that they look like WWII British infantry helmets, or else be curiously humped or pock-marked.

I was reminded this afternoon that we have several species of tortoise beetle in the UK. Admittedly, at 6 mm long and mostly green, they may not be as striking as their South American counterparts - but they are recognisably built on the same pattern. Here is one that the kids brought in. 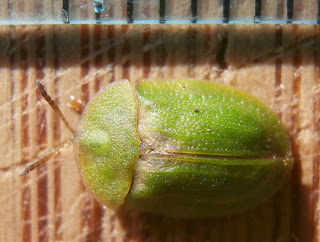 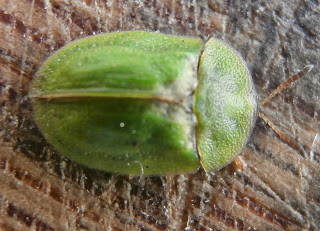 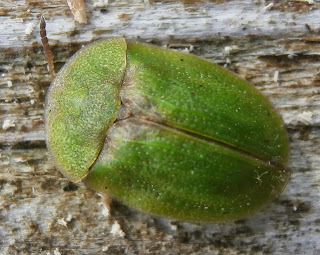 I had got as far as the genus Cassida before I stumbled upon Dave Hubble, organiser of the British Leaf and Seed Beetle Recording Scheme. He kindly looked at the photographs and asked for a shot of the underside - so now I know what I need next time! Still, I did enjoy perusing a fellow ecologist's wonderfully eclectic blog.