Book review: The Birds of Cuba. An Annotated Checklist 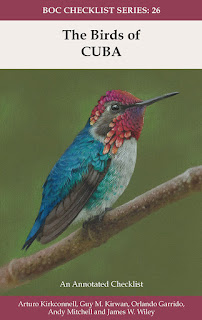 The Birds of Cuba. An Annotated Checklist. BOC Checklist Series: 26

My first visits to Cuba were in 1995 and 1996, as a consultant to the World Conservation Monitoring Centre and United Nations Development Programme respectively, to work with Miguel Vales and a team of Cuban scientists at the Centro Nacional de Biodiversidad (CeNBio-IES) on the national Biodiversity Country Study, one of the first requirements of the UN Convention on Biological Diversity. This was during the período especial, the 'Special Period' of adverse economic conditions triggered by the collapse of the Soviet Union in 1989, and it was a real eye-opener for me. Even though everything from toilet paper to fuel, and beef to coffee had disappeared from daily life, and despite our conservation work being frustrated by the US embargo on the country (Nairobi funds were routed through Washington were frozen, while California-based Esri were threatened with fines for attempting to supply the GIS package Arc Info), I found Cubans remarkably hospitable, making me feel most welcome, sharing their extremely limited resources unselfishly and even going out of their way to find a vehicle to take me birding outside La Habana in the Sierra del Rosario Biosphere Reserve. One of my most poignant memories was being shown one lunchtime a Gundlach specimen of the extinct Cuban Macaw Ara tricolor—the sole example held in Cuba—that (I learned from this new checklist) has subsequently been lost, probably stolen. At that time, few foreign birders visited Cuba, the majority of them Canadians or Europeans. The embargo was a disincentive to US tourism, but some birders and ornithologists from that country nevertheless succeeded in visiting the island.

Since then, I have been back several times, and particularly since 2014, tourism flourished as US-imposed restrictions were relaxed, a welcome policy that culminated in the restoration of direct flights in 2016. Although there has been a reversal of political rhetoric under the retrograde policies of the Trump regime, I am hopeful that a more pragmatic future awaits. At any rate, there seems no better time to publish a revision of the Cuban avifauna, something that had not been attempted—leaving aside the more summary treatment in Garrido and Kirkconnell’s field guides to the birds of Cuba (2000, 2011)—since Garrido and García’s Catálogo de las aves de Cuba published in 1975. I was honoured to be asked to review the new checklist for the next issue of the Bulletin of the British Ornithologists’ Club.

For more information on birds and birding in Cuba, you could do worse than read Seeing Cuba’s endemic birds and other specialities. 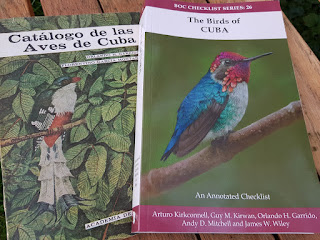