On 29 March, a team of ornithologists working on a Western Hemisphere Shorebird Reserve Network project (Sandra Giner, Virginia Sanz, Gianco Angelozzi and I) were carrying out International Shorebird Censuses on the Punta Maragüey spit on the western coast of Falcón with Jose Ochoa. Gianco was able to get close to a flock of several hundred Red Knot (Calidris canutus rufa) moulting into breeding plumage, and using our best optics - a superb new Kowa scope donated in 2018 by Cley Spy - to pick out and photograph seven flagged individuals, of which only FELG9HL was legible; this bird also carried a geolocator (Gianco's photograph attached - more here).

Today I checked the bird's whereabouts and found that it had been photographed (attached - photographer unknown) 52 days later on 20 May in magnificent full breeding plumage at a reservoir W of Townsend in S Ontario, Canada. This elucidates only part of the jigsaw puzzle of migratory connectivity for this threatened shorebird, and quite appropriate given that this Manomet / WHSRN work is financed by Environment Canada. Next stop for these birds will be the high Arctic. The earliest data available for FELG9HL come from 30 May 2011 in Delaware, so the bird is perhaps 10 years old and will have made this journey as many times. 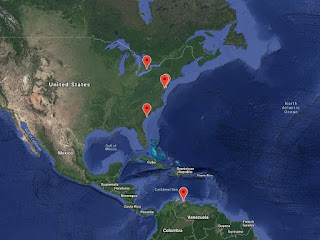