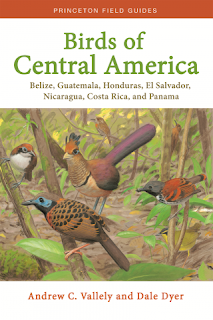 Just finished my review of the superb new guide to the birds of Central America, to be published in Neotropical Birding 25...

Thanks to Princeton University Press for providing a review copy.

Until recently, field guides for Central America were getting rather long in the tooth, although such masterworks as Howell & Webb (1995), Stiles & Skutch (1989), and Ridgely & Gwynne (1989) never become obsolete. The situation was remedied by the first field guides to Belize (Jones 2003) and Honduras (Gallardo 2014), followed by pocket guides to Costa Rica (Garrigues & Dean 2007), Panama (Angehr & Dean 2010) and Nicaragua (Chavarría-Duriaux et al. 2018; see review, page 88) published by Zona Tropical/ Comstock Publishing Associates (latterly imprints of Cornell University Press), and by the Peterson guide to Northern Central America (Fagan & Komar 2016). The present volume, as the first field guide to the entire Central American avifauna, fills the gaps left by El Salvador and Guatemala and brings the identification literature for the remaining countries up to date.
A decade in production, the book covers the 1,261 bird species that had been documented in the political region of Central America as of August 2017, an avifauna comparable in size with that of a typical South American country – quite a daunting undertaking. Each of the 1,194 bird species of what the authors define as the ‘core avifauna’ is accorded a main species account, while a further 67 ‘marginal, dubious and hypothetical species’ are relegated to an annotated appendix.
The region is delimited politically rather than biogeographically, so Vitelline Warbler Setophaga vitellina, a West Indian species found only on the Swan Islands and (extralimitally) on the Cayman Islands, is included. Taxonomy and order broadly follow American Ornithological Society (AOS). There are some logical departures, such as treating Audubon’s Setophaga auduboni and Goldman’s Warblers S. goldmani as separate from Yellow-rumped Warbler S. coronata, or recognising Azuero Parakeet Pyrrhura eisenmanni as distinct from South American Painted Parakeet P. picta.
The main accounts comprise carefully distilled, concise identification texts and good-sized distribution maps (29 x 36 mm) on the left, with plates on facing spreads. Layout is intuitive, facilitating cross-referencing to the facing page. For species that exhibit geographic variation northern/western subspecies appear on the left-hand side of the plate and eastern/southern subspecies on the right. Plates are the most realistic of any guide to this region, accurately capturing the jizz and plumage of all groups. Birds are usually shown in profile to facilitate comparison, but the illustrations have a pleasing three-dimensional quality and the plates themselves are works of art. The antbirds and furnariids are spectacular. The figures are large and fill each plate, leaving minimal blank plate.
Critical groups such as shorebirds, tyrant flycatchers and warblers are very nicely illustrated, the latter with both breeding and non-breeding plumages. There should be no need to carry an additional guide to the birds of North America. It is no surprise to learn that both artist and author spent a great deal of time in museum collections, especially the American Museum of Natural History, checking and comparing specimens. The depth of their research is apparent in the quality of the entire book. It may take a while for the eye to adapt to the lack of colour saturation of the plates, particularly for some groups like vireos and thrushes. However, I find the artwork very pleasing.
In the introduction, the authors set out their reasons for not labelling figures with subspecies names; having examined the full range of geographic variation they felt that a more general description of geographic variation was more appropriate. Given the diligence with which the authors examined museum specimens, I would have liked to have seen scientific names of subspecies specified, which I think would have added clarity to accounts of, for example, Willet Tringa semipalmata, Short-billed Dowitcher Limnodromus griseus, Osprey Pandion haliaetus, Dusky-capped Flycatcher Myiarchus tuberculifer and Northern Rough-winged Swallow Stelgidopteryx serripiennis.
Text focuses squarely on the task of identification. In the interest of brevity, it omits information on aspects of life history except where they aid identification. An introductory line on regional and global status precedes the main identification text, which is followed by a short section covering geographic variation where appropriate. Notes on habits indicate habitat preference, the favoured habitat stratum (canopy vs understorey, etc.), and distinctive features of behaviour. The final section describes vocalisations. The compilation of accurate distribution maps across seven nations must have consumed an inordinate amount of time. I could find no obvious oversights, although unfortunately Turquoise-browed Eumomota superciliosa and Blue-throated Motmot Aspatha gularis maps have been transposed during layout. The authors have wisely treated records on popular online platforms with caution, which will ensure that the distributional data provides a solid baseline for future work.
Compressing practical information on the identification of 1,200 species into one volume demands a good-sized book. This one is about the size of old guides such as Stiles & Skutch or Ridgely & Gwynne, and weighs 1.3 kg. Yes, for those who want to carry a pocket guide, it is bulky, and also heavy. And it is likely that many visitors will be inclined to pass it over in favour of a lighter guide. In my opinion that would be a mistake. I much prefer to carry a dependable, authoritative reference and will gladly have this in a backpack in preference to a smaller guide. At the very least, for those who will not be taking it in the field, it should be an essential reference for consultation back at camp or at the hotel.
So, an excellent addition to the literature on the birds of Central America with strong text and plates. This new guide becomes the benchmark for the region and acts as a worthy geographical complement to Howell & Webb (1995), with a slight geographic overlap. The authors deserve the highest praise for a magnificent achievement.