Neotropical Birding 14 has just flopped through my letterbox, so... 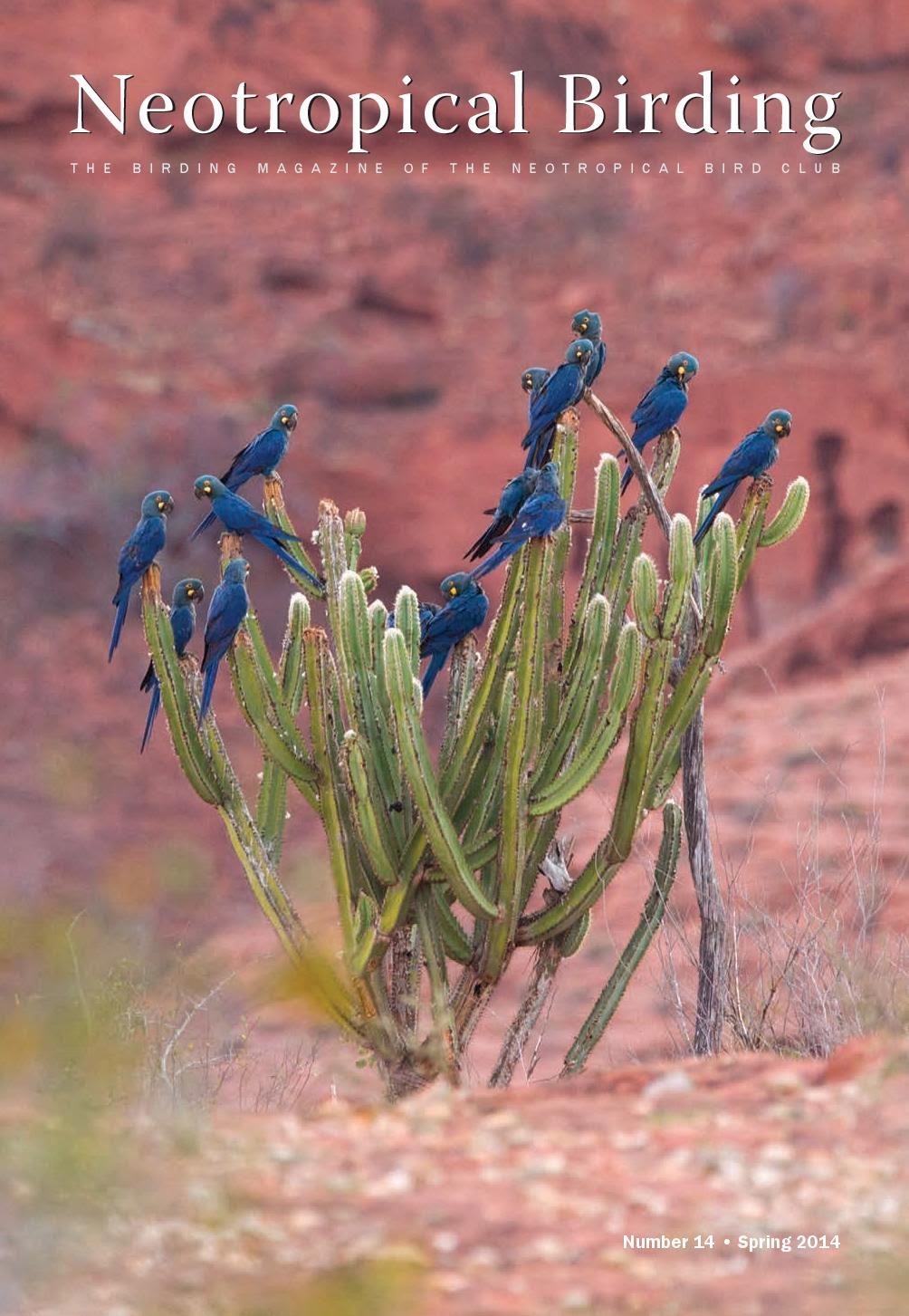 Welcome to issue 14 of Neotropical Birding!


This issue is dedicated to one of the Neotropical Bird Club's closest and most-valued collaborators, Juan Mazar Barnett who died in November 2012. The idea for a memorial issue was suggested by James Lowen a day or two after we heard that Juan had passed away; Guy Kirwan was already thinking along the same lines. They knew Juan well enough to coordinate the issue. I had only met him once or twice, when we happened to coincide during our annual August pilgrimages to the UK to attend the Birdfair, but I was still shocked by the news – Juan seemed such a vital figure with a vast amount still to contribute. Together with Germán Pugnali, my Guest Editors contacted some of those who knew Juan with an invitation to submit articles, and also penned their own. We quickly received too much material for NB14 and, no doubt, could have comfortably filled two issues on the same theme. Seventeen months after we began, this Juan Mazar Barnett memorial issue goes to press. But we have certainly not seen the last of the tributes to one of the region's most gifted and well-loved ornithologists.
We launch straight into the thick of Neotropical systematics and taxonomy with a monster edition of our regular Splits, lumps and shuffles column, which includes a summary of those Amazonian species described in the HBW Special Volume – and for a fraction of the cost and shelf space. Alex Lees ably guides us through the terrors of suboscine splits, as he probes scythebill systematics and reshuffles his manakins. Epinecrophylla ailments and Myrmeciza moans end here. Don't be frightened: do what the man says and just “get your lists out!”

Even more terrifying than taxonomy is news of the probable extinction of Alagoas Foliage-gleaner Philydor novaesi, a species discovered just 35 years ago, currently considered Critically Endangered and the subject of our Globally threatened bird column. Alex Lees and his co-authors assess the chances that this and other avian endemics of the Pernambuco Centre continue to survive. Ciro Albano provides the photographs.

The world's highest capital city, La Paz, is the subject of this issue's Capital birding,as guide Germán Pugnali tells us how to beat the soroche with some high altitude birding.

Brazil's state of Roraima is our Birding sites destination, with Luciano Naka (who already wrote a JMB memorial for El Hornero) and Thiago Laranjeiras. Many of the specialities of the previously inaccessible white-sand forests can be found here along with Guiana Shield forest and savanna species that have been traditionally sought in southern Venezuela and Guyana.


Guy Kirwan muses on the Endangered Lear’s Macaw, named after bird artist – and sometime nonsense-poet – Edward Lear. This Photospot features more of Ciro Albano's beautiful images, one of which graces our cover.

After 20 years at Cotinga, the regular Neotropical Notebook column has migrated over to Neotropical Birding. Guy Kirwan continues to coordinate the collection of published and unpublished records, helped by a team of national compilers and benefiting from NEOORN's wonderful NeoLit service. If anyone thinks they fill Guy's shoes, please let me know – I am looking for someone to take on the job when he retires from duty in 2015.

Jez Bird tells members how our conservation funds have been used to the benefit of the Neotropical birds we all enjoy in the NBC Conservation Awards Update.

And we end with my own Book reviews of the new edition of ffrench's Birds of Trinidad & Tobago and – an ornithological tour-de-force – the impressive coda to the 16 volume Handbook of the Birds of the World: never has an index been such an exciting read!

More on Juan Mazar Barnett and the birds that inspired him in this special issue of Neotropical Birding. My special thanks to Germán Pugnali, Guy Kirwan, James Lowen and to all our writers and photographers for working to make this a fitting tribute to Juan.

I know Juan would have wanted us to wish you happy Neotropical birding!