Despite the reduced catch, there were two new species. By 19h00, I had already seen a couple of December Moths resting outside the trap. At 05h30 an attractive bright orange geometrid came into the light and then settled on the gravel a few feet from the trap. This proved to be a male Scarce Umber, which unfortunately flew away while I was trying to photograph it later in the morning. 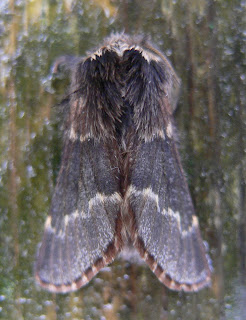