Chalcolestes viridis, Willow Emerald Damselfly began to colonise the UK only a few years ago. The first British record was a dead adult found at Pevensey, E Sussex in 1979, followed by a larval exuvium collected at Cliffe Marshes, N Kent in 1992. Adults were seen near Felixstowe, Suffolk in 2007, but in 2009 there were at least 400 reports from N Essex, E Suffolk and S Norfolk, and in subsequent years the species has pushed westwards.

Having never seen its widespread British cousin, Lestes sponsa, in our garden I have never expected to encounter this new arrival. First seen yesterday, but it took flight and disappeared before I could get photos. Despite the stiff breeze it was on the same low perch today, 50 cm up next to bushes, well away from water. 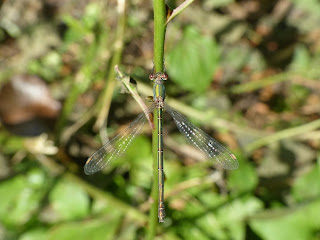 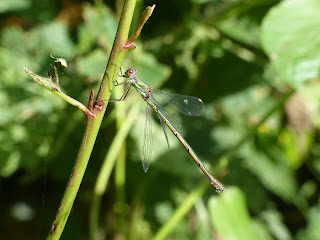 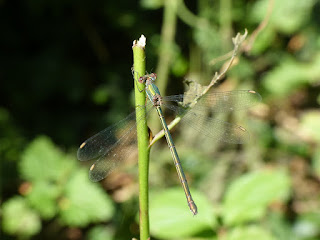