Book review: Woodpeckers of the World by Gerard Gorman 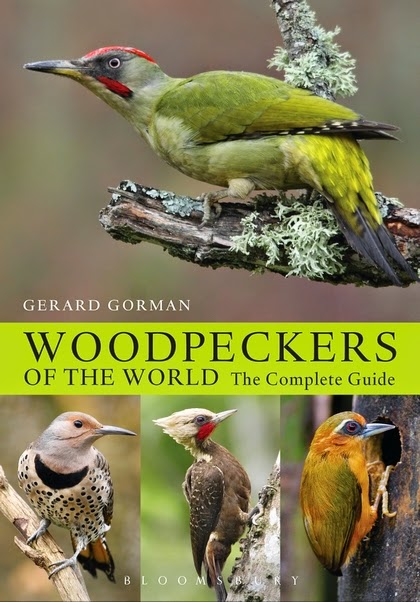 Woodpeckers of the World

Gerard Gorman is a woodpecker nut. I know because I have been privileged enough to have spent a couple of weeks with him in the field, sharing part of his quest for the world's woodpeckers. Our field trip took place in 2009 and began when we met in an aeroplane on the way to Guyana. As owners of bird tour companies, we had both been invited to travel to Guyana on a 'fam' trip. We met on the London – Port-of-Spain leg and, since we had been assigned adjacent seats, spent much of the ten hour flight talking about birds. Needless to say, I learned a lot about the Picidae! The trip came out of the blue for me and I had been unable to return home to load my collection of bird vocalisations onto my iPod, but Gerard assured me that he had everything that we would need. Some time into the flight I asked to borrow his iPod. When I scrolled through the species list, I found only woodpeckers... Throughout our Guyana trip, Gerard would always home in on a woodpecker, even to the point of shunning some of the Neotropics' most charismatic species. Since then I have regarded this often-overlooked family in a new light and with renewed interest. So who better to guide us through the world of woodpeckers?

This is a major new overview of the world's woodpeckers by an expert on the subject who has two previous woodpecker publications under his belt: Woodpeckers of Europe and The Black Woodpecker. Woodpecker taxonomy is a subject for debate, but for the purposes of this book the author recognises 239 species. Each receives a detailed text with information on identification, vocalisations, food, conservation status, habitat, range and notes on taxonomy and similar species. Interestingly, for the first time, the author specifically includes information on drumming – or absence of it. Each species account is accompanied by a range map and typically several photographs illustrating sexual dimorphism or subspecific variation.

As one would expect, the text has been exhaustively researched and carefully compiled from a broad range of primary sources, but the author himself has travelled widely to gain extra field experience with a large number of species. So this is more than a literature review; it is a real contribution to our knowledge of woodpeckers. As the author recognises: “During my research it soon became clear that many species of woodpecker are poorly-known, with questions on taxonomy, biology, behaviour, distribution and even existence remaining unanswered.” One of the contributions of this book is to point out areas that require further research.

Good as the text is, the photographs are surely going to be the main reason for purchasing this book. There are, on average, three images per species and the quality is generally excellent. My favourites are the Piculus, the photographs capturing the striking plumage and eye colour that often receive rather drab treatment in field guides. I have to mention the wonderful sequence of the interior of a Downy Woodpecker nest, showing the development of the young.

Maps need some checking. For example, of the Neotropical woodpeckers I checked, Ivory-billed Woodpecker Campephilus principalis is shown on Hispaniola rather than Cuba; the Trinidadian range of Chestnut Woodpecker Celeus elegans is not shown, whereas Red-crowned Melanerpes rubricapillus is erroneously shown on Trinidad (it is found on Tobago); the Belizean range of Acorn Woodpecker Melanerpes formicivorus is not depicted; Cinnamon Woodpecker Celeus loricatus is shown for W Venezuela, although it does not occur in the country; and the NE Venezuela range of Golden-spangled Piculet Picumnus exilis is absent.

For those who already have Winkler et al.'s 1995 Pica Press Woodpeckers of the World (and / or HBW 7, published in 2002), is there enough novel content to justify buying this new book? The answer is yes. The text updates Winkler et al. and an extensive bibliography of post-2002 publications is provided (current enough to include, for example, del Rio et al.'s 2013 six-way split of the 'Golden-green' Woodpecker Piculus 'chrysochloros' complex). The photographs provide a useful complement to both Winkler et al. and HBW 7. For example, the distinctly larger bill of White-bellied Piculet Picumnus spilogaster compared with other similar species is clearly shown – something that I have not seen in field guide illustrations.

In short, a really nice reference book to an attractive and often under-rated group of birds. This will surely set the record straight. Excellent work Gerard!