Neotropical Birding 13 has just been sent to our printers, in good time for distribution at this year's Birdfair. Please visit the Neotropical Bird Club stand. 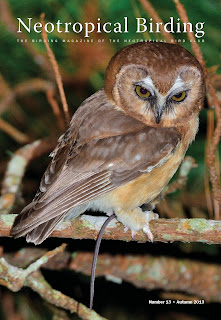 Welcome to issue 13 of Neotropical Birding!

We begin in Central America, where our cover story is an Identification workshop on the vocalisations of Unspotted Saw-whet Owl executed by regular contributor Knut Eisermann.

Steve Howell has contributed many scholarly articles to the Club’s journals, fruit of his unrivalled field experience. This time he argues persuasively for the recognition of Mexican Hermit Phaeothornis mexicanus, originally described by Hartert in 1897, now usually lumped with P. longirostris.

Taxonomic decisions have implications for conservation. BirdLife International’s Joe Taylor explains why Yellow-naped Parrot Amazona auropalliata is a Globally threatened bird.
.
Once again, our twin Photospots are dedicated to cryptic species - but these subjects are anything but dull. The two Eleothreptus nightjars, White-winged and Sickle-winged, are superbly captured by Paul Smith. The truly bizarre plumage of juvenile Cinereous Mourners has only just been documented (last year) on the basis of museum specimens, and our authors, Johan Ingels and Mathieu Entraygues, provide the first photographs from the field. Even more fascinating is the video clip that emerged after our article was submitted.

Capital birding focuses for the first time on a sub-national territory as Alex Lees invites us to take a closer look at his adopted city of Belém, capital of Brazil’s Pará state, home to the Goeldi Museum and gateway to some mouth-watering Amazonian birding.

Our regular Splits, lumps and shuffles column shows no sign of shrinking. As ever, we are in the capable hands of Alex Lees, the garimpeiro of Neotropical ornithological literature.

And we continue with Book reviews of the exciting new Fieldbook of the Birds of Ecuador, including the Galápagos Islands, and the superb compendium Neotropical Birds of Prey.