Birds of Puerto Rico and the Virgin Islands. 3rd edition 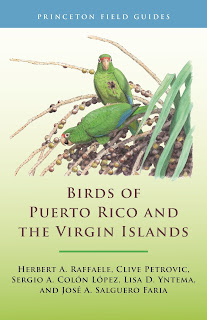 Birds of Puerto Rico and the Virgin Islands. 3rd edition

First published in 1983, ‘Raffaele’ is the standard field guide to the birds of Puerto Rico and the Virgin Islands. My previous copy is the revised 1989 edition, which follows the format of most guides of its era, with plates grouped in a single block, a number of them monochrome, both measures to save on colour printing costs; many of the paintings are works of art rather than comparative depictions. Three decades later, the 3rd edition places full colour illustrations opposite the text so that all information on a particular species can be gleaned at a glance from an open spread. Species are grouped by habitat to facilitate comparison of similar species. This may be slightly disconcerting to users who have only just got used to wildfowl appearing at the beginning of a field guide, and on this subject I agree with Steve Howell (Howell et al. 2009, 2012) that we should strive to follow a “field-friendly sequence of families”. But that is only a passing comment; this guide is small enough that a particular group of birds will quickly be found by flicking through the pages, something facilitates by the flexible cover.

Raffaele is joined by four co-authors for this edition, two of them well-known in Puerto Rican ornithological circles and two authorities on the birds of the US and British Virgin Islands. The contribution of each is not described but one can probably assume that status and distribution reflect the most current knowledge. The artists are, with one exception, new, and paintings are of a high standard. Taken together, visitors should have little trouble identifying most of the birds of the territories. As with the rest of the Neotropics, the visitor would still be well-advised to take along a standard North American field guide.

In the 30 odd years since the last edition, the number of species recorded has increased by a quarter!The guide covers all 347 species now on the checklist. Helpfully, vagrants and hypothetical species are relegated to the rear of the book, which allows the main body to focus on those species most likely to be encountered. Taxonomy largely follows AOS, departing in a few cases such as the splitting of Eastern Tringa (semipalmata) inornata and Western Willet T. (semipalmata) inornata, Puerto Rican (Loggerhead) Kingbird Tyrannus (caudifasciatus) taylori, and Puerto Rican (Lesser Antillean) Pewee Contopus (latirostris) blancoi. For the first time, local names are included, as well as standard English names, and they also receive their own index. This will surely be welcomes by local birders and naturalists.

Introductory chapters provide analyses of the avifauna and its changes over time, geography and biogeography, and conservation, while potential birding destinations are suggested at the end of the book.

Even with the increase in the number of species covered and supplementary information, this guide is about the same size and weight as its predecessor, and—unlike many field guides to the megadiverse Neotropics—it really is a portable reference. This is the obvious choice for anyone visiting either Puerto Rico or the Virgin Islands. The improvements on the previous edition are such that those in possession of a 1980s vintage would be wise to invest the very modest cover price to equip themselves with this new guide. It will also be a mandatory purchase for students of the wider West Indian avifauna. The authors and artists are to be congratulated on producing a handy, accessible guide that will doubtless help further the conservation of the birds of these territories.